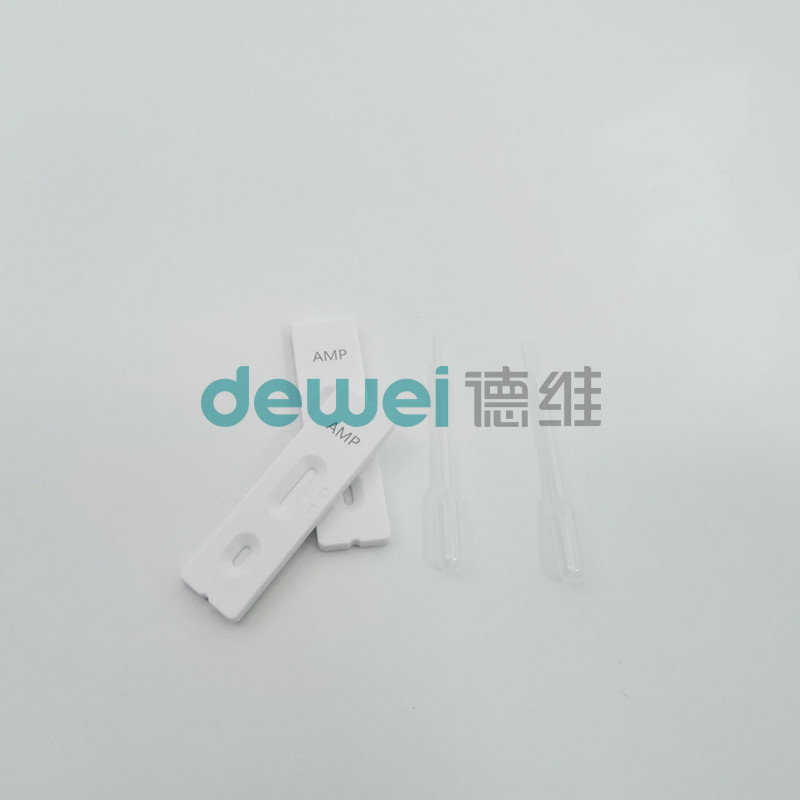 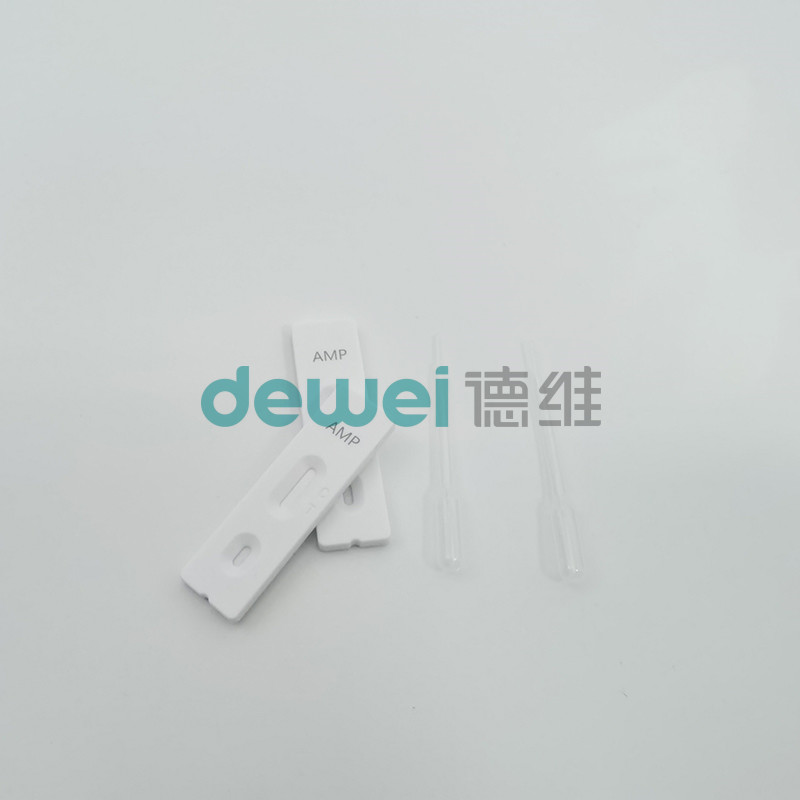 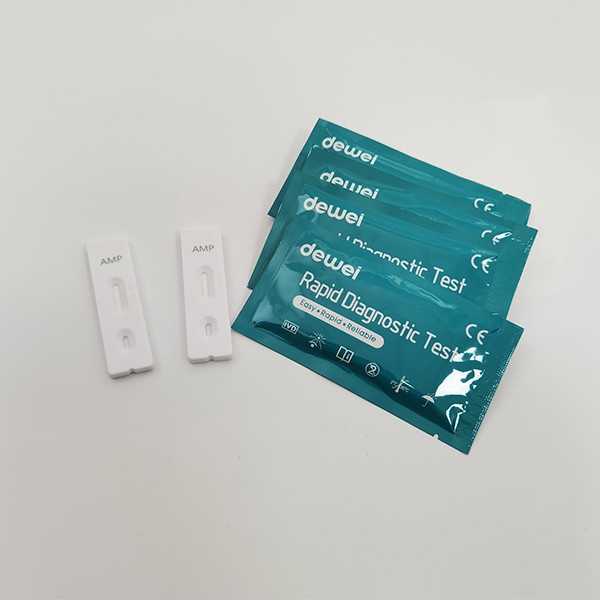 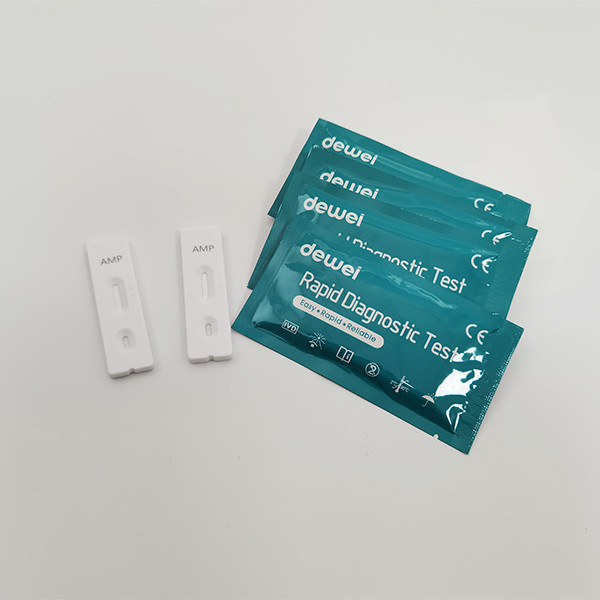 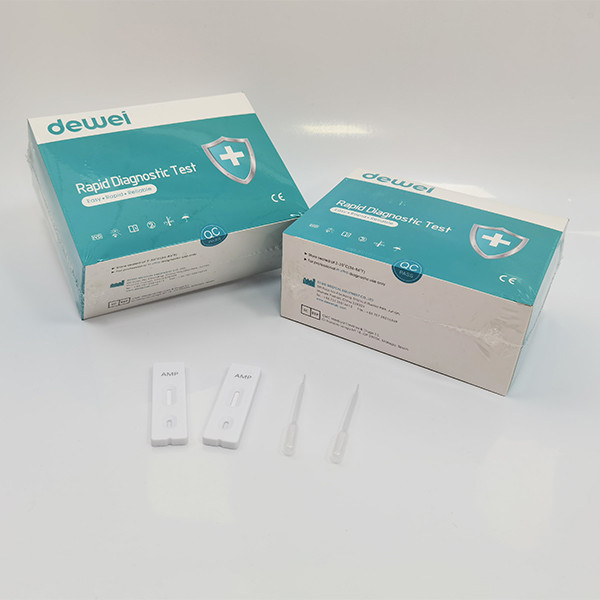 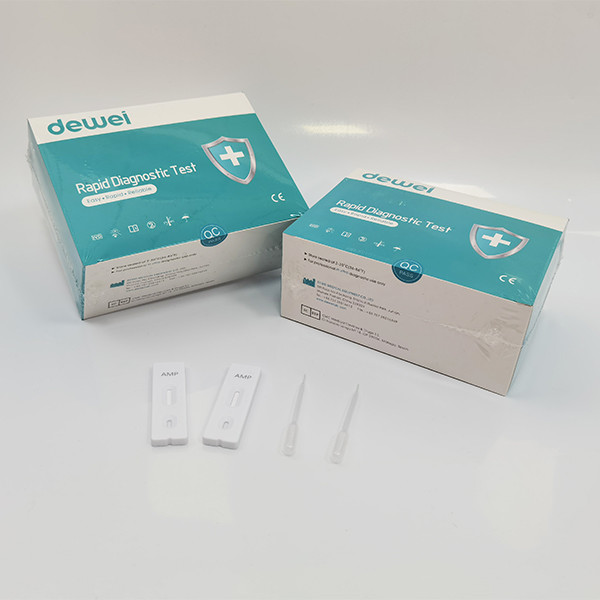 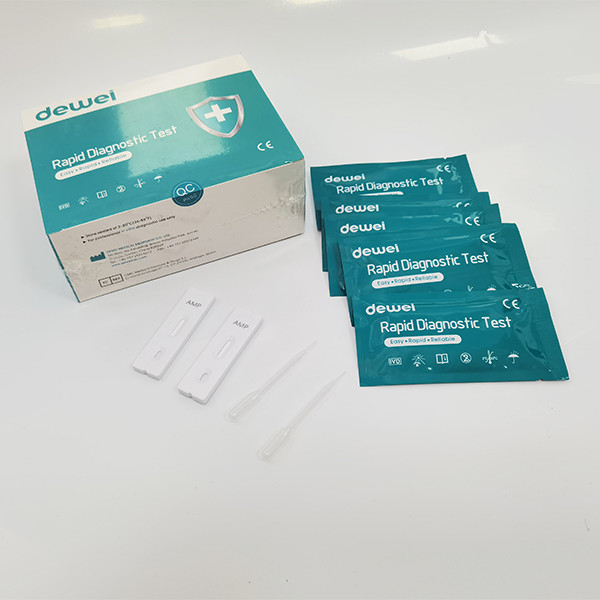 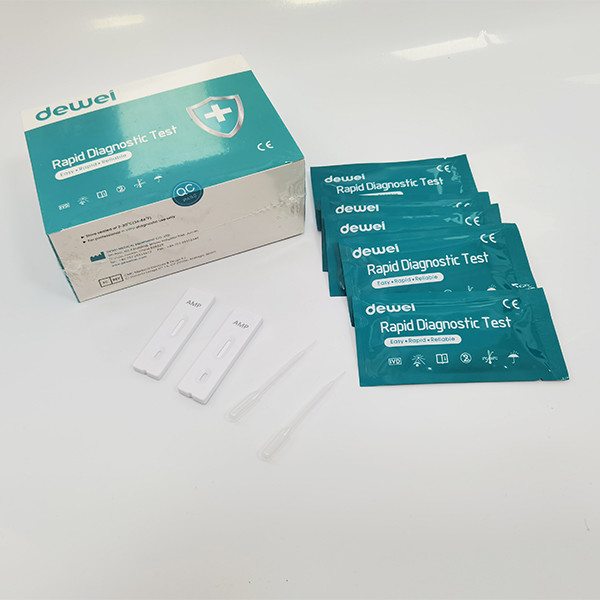 Amphetamine (AMP) Rapid Test is a rapid, screening test for the qualitative detection of Amphetamine and metabolites in human urine at specified cut off levels.

This assay provides only a preliminary analytical test result. Gas Chromatography/Mass spectrometry (GC/MS) is the preferred confirmatory method. Clinical consideration and professional judgment should be applied to Amphetamine (AMP) of abuse test result, particularly when preliminary positive results are indicated.

Amphetamine and the structurally related “designer” drugs are sympathomimetic amines whose biological effects include potent central nervous system (CNS) stimulation, anorectic, hyperthemic , and cardiovascular properties. They are usually taken orally, intraveneously, or by smoking. Amphetamines are readily absorbed from the gastrointestinal tract and are then either deactivated by the liver or excreted unchanged in the urine with a half life of about 12 hours. It can be detected in the urine for 1 to 2 days after use. Amphetamine is metabolized to deaminated (hippuric and benzoic acids) and hydroxylated metabolites. Methamphetamine is partially metabolized to amphetamine and its major active metabolite. Amphetamines increase the heart rate and blood pressure, and suppress the appetite. Some studies indicate that heavy abuse may result in permanent damage to certain essential nerve structural in the brain.

Amphetamine (AMP) Rapid Test is a competitive immunoassay that is used to screen for the presence of Amphetamine (AMP) and metabolites in urine. It is chromatographic absorbent device in which, drugs within a urine sample, competitively combined to a limited number of drug monoclonal antibody (mouse) conjugate binding sites.

To serve as a procedure control, a colored line will appear at the Control Region (C) of the test, if the test has been performed properly.

1. This test has been developed for testing urine samples only. No other fluids have been evaluated. DO NOT use this device to test substances other than urine.

2. There is a possibility that technical or procedural errors, as well as interfering substances in the urine specimen may cause erroneous results.

3. Adulterated urine samples may produce erroneous results. Strong oxidizing agents such as bleach (hypochlorite) can oxidize drug analyte. If a sample is suspected of being adulterated, obtain a new sample in a different, unused, cup.

4. This test is a qualitative screening assay. It is not designed to determine the quantitative concentration of drugs or the level of intoxication.

5. A positive result does not indicate level or intoxication, administration route or concentration in urine.

6. A negative result may not necessarily indicate drug-free urine. Negative results can be obtained when drug is present but below the cut-off level of the test.

Though there is an internal procedural control line in the test device of Control region, the use of external controls is strongly recommended as good laboratory testing practice to confirm the test procedure and to verify proper test performance. Positive and negative control should give the expected results. When testing the positive and negative control, the same assay procedure should be adopted.

The comparison studies were conducted using Rapid Amphetamine (AMP) Test and commercially available rapid drugs of abuse tests. The studies were performed on approximately 600 clinical specimens previous collected from the clinical settings. Presumptive positive results were confirmed by GC/MS. Results were as follows:

To test the specificity and cross reactivity of the test, the test device was used to test Amphetamine (AMP), metabolites and other components of the same class that are likely to be present in urine. All the components were added to drug-free normal human urine. The following structurally related compounds produced positive results with the test when tested at levels equal to or greater than the concentrations listed below.

Clinical urine samples may contain substances that could potentially interfere with the test. The following compounds were added to drug-free urine or drug positive urine with the concentration 50% below the cutoff and 50% above the cutoff, respectively. All potential interfering substances were added at a concentration of 100µg/mL (All concentrations were confirmed with GC/MS). The urine specimens were tested with the Rapid Amphetamine (AMP) Test. None of the urine samples showed any deviation from the expected results.

The specific gravity studies were conducted on different specific gravity including 1.002,1.010, 1.020, 1.030, 1.040 specimens with drug free urine or drug positive urine with the concentration at 50% below and 50% above cutoff level (All concentrations were confirmed with GC/MS). Each sample was tested by the corresponding Rapid Amphetamine (AMP) Test. The results demonstrate that varying ranges of urinary specific gravity do not affect the test result.

The pH of an aliquot negative urine pool is adjusted to a pH range of 3 to 9 in 1 pH unit increments and spiked with each drug at 50% below and 50% above cutoff levels (All concentrations were confirmed with GC/MS). Each sample was tested by the corresponding Rapid Amphetamine (AMP) Test. The result demonstrate that varying ranged of PH do not interfere with the performance of the test.