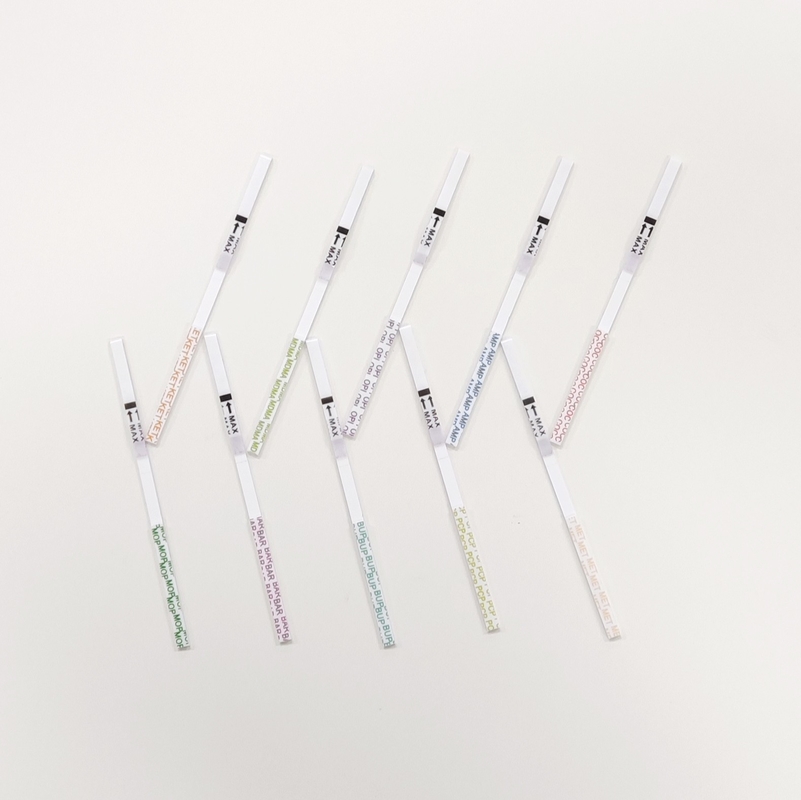 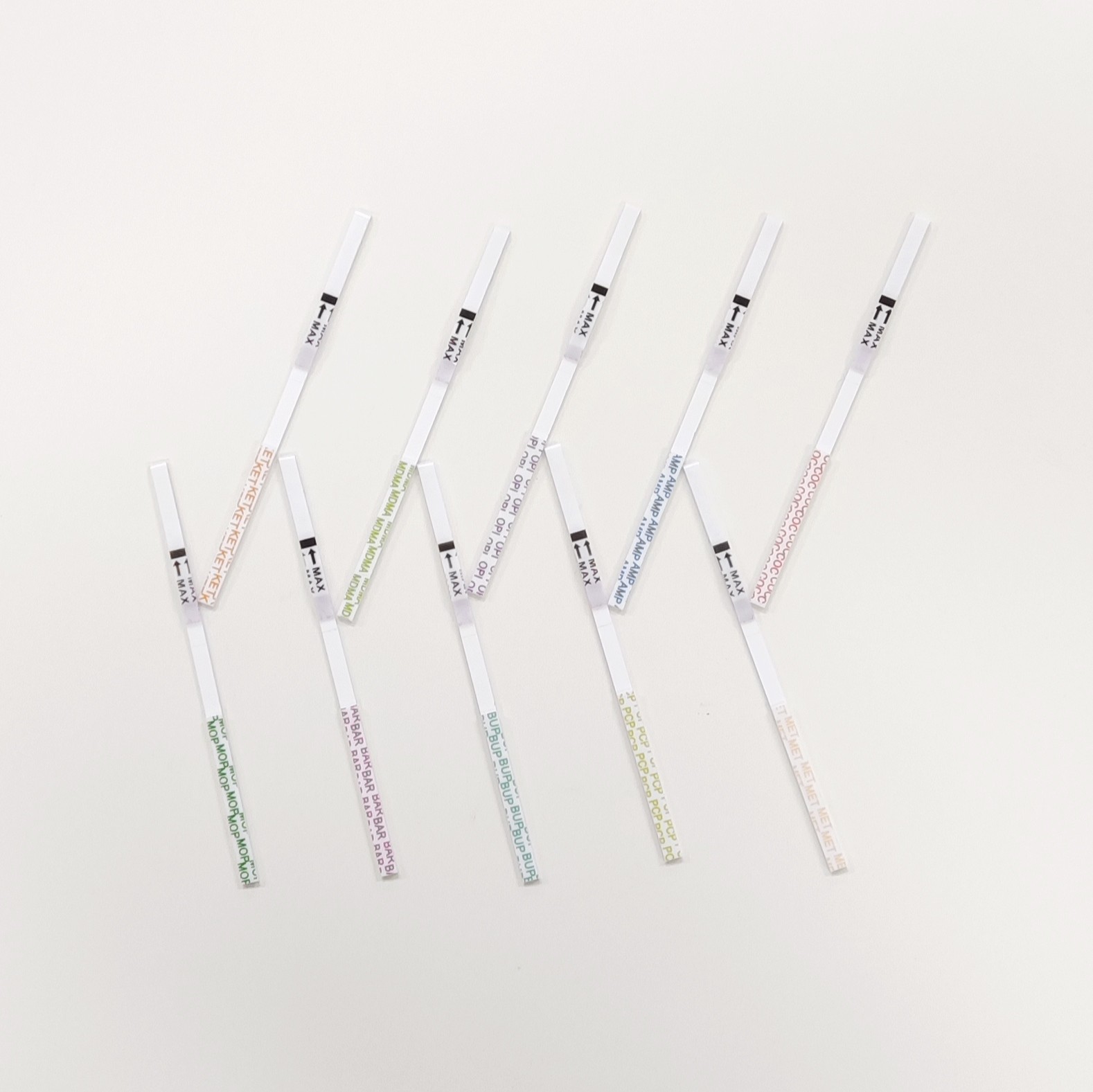 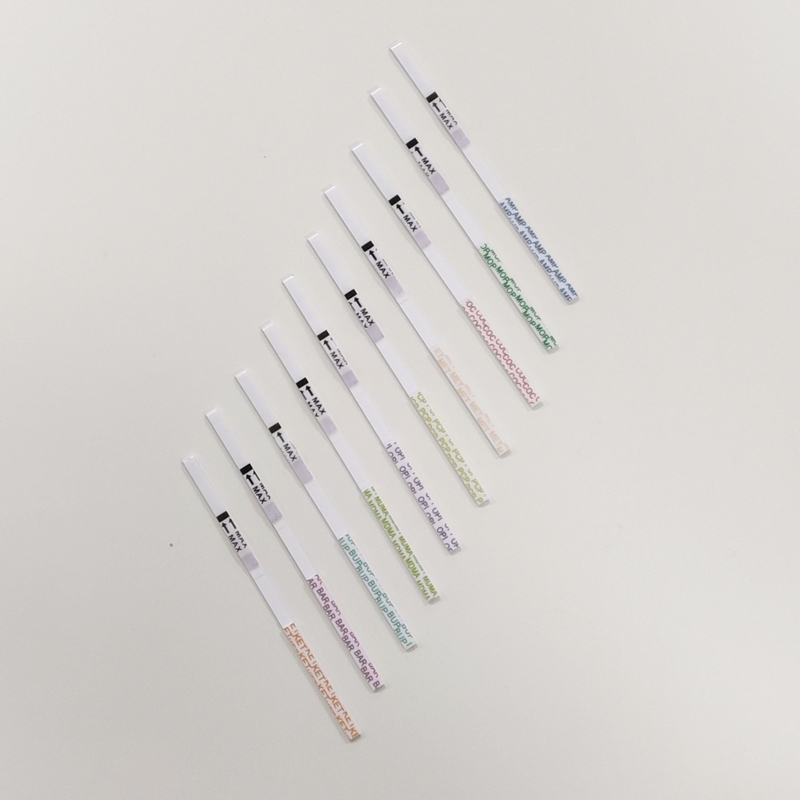 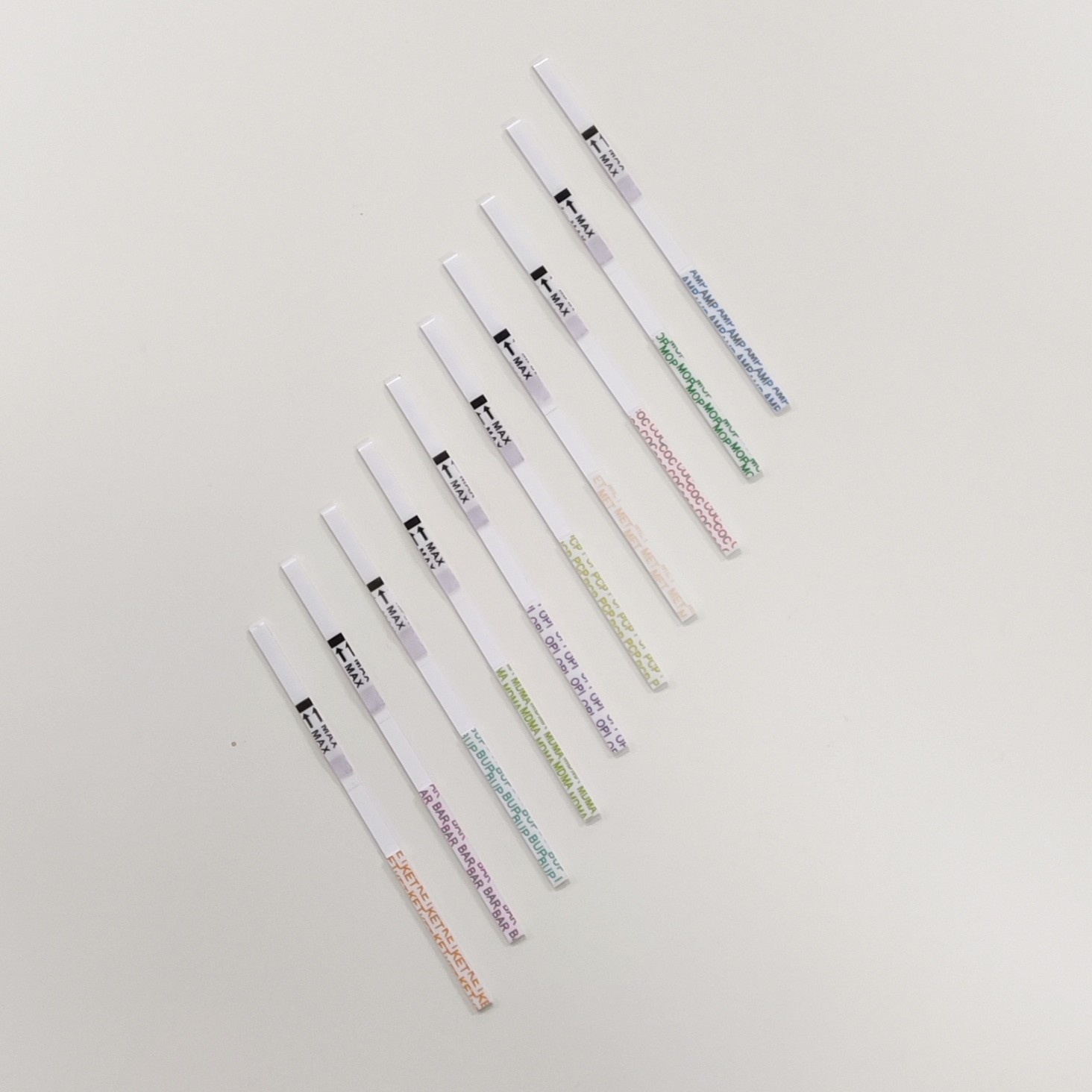 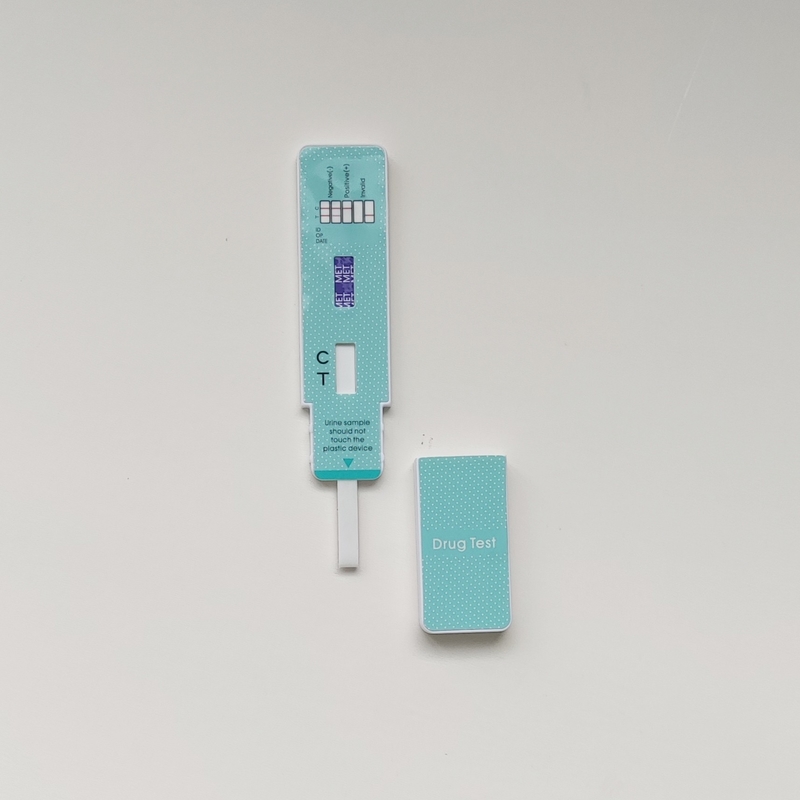 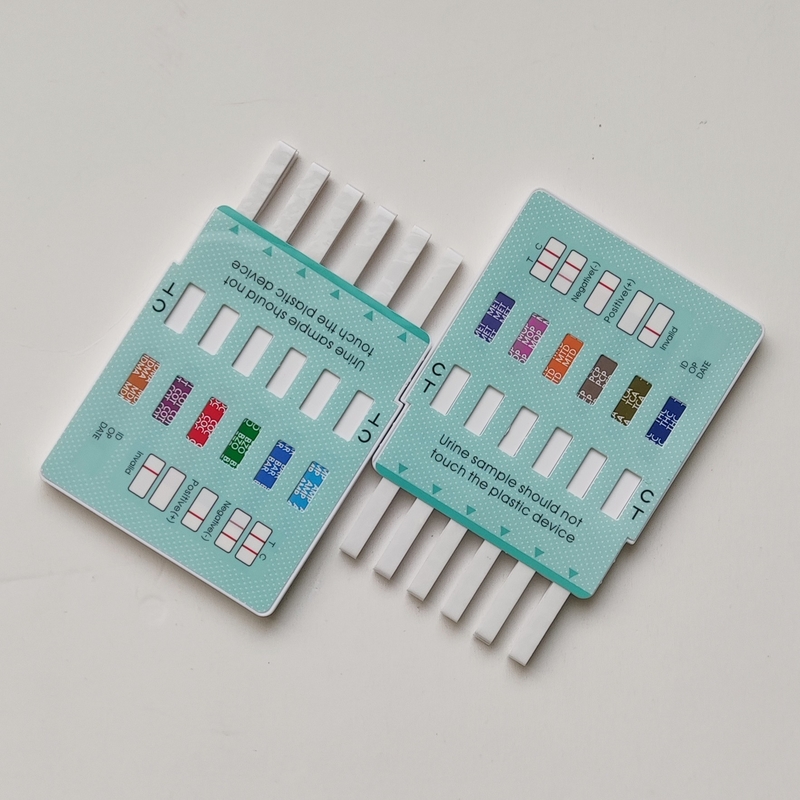 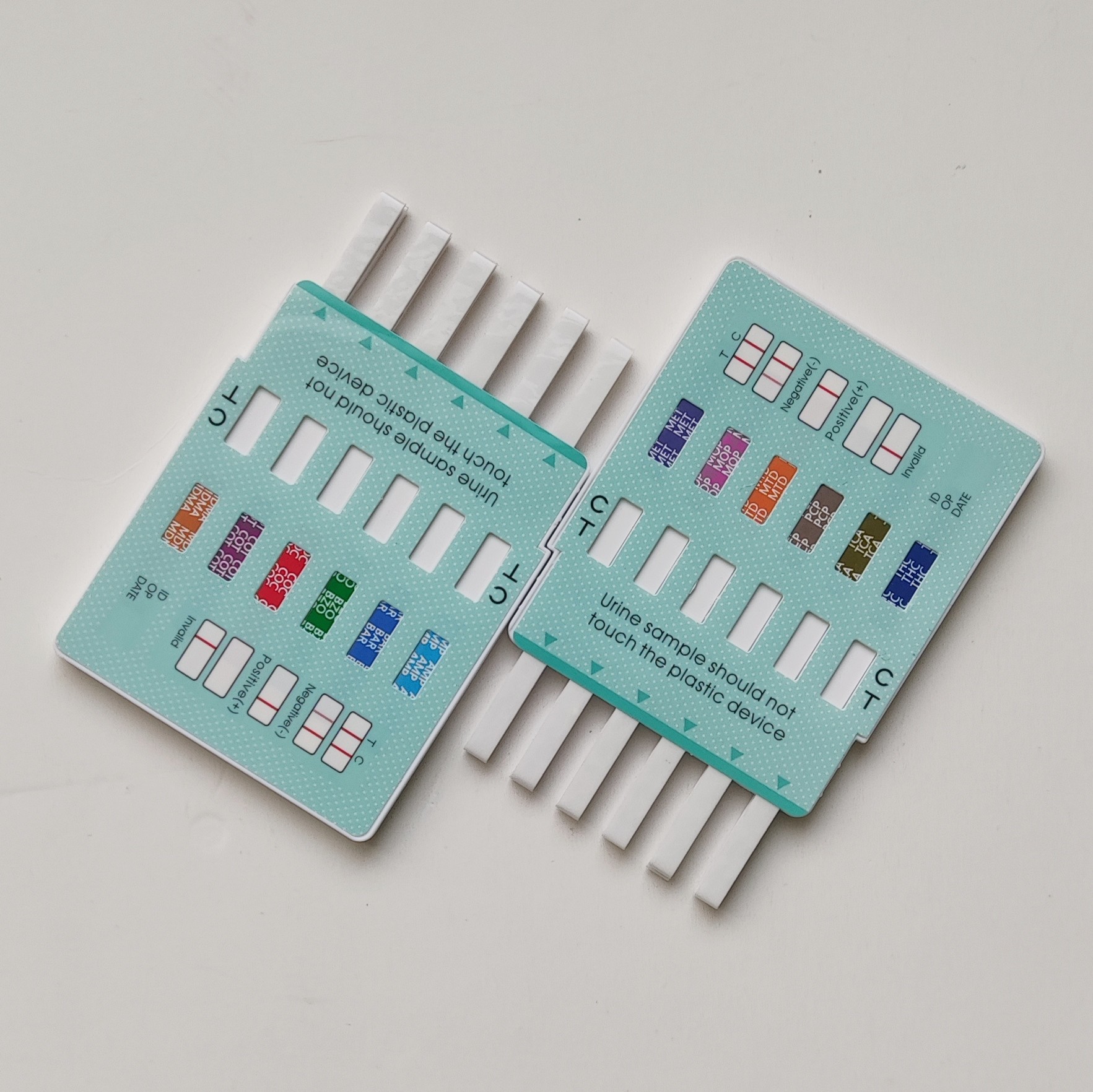 13-15 combination of the following drugs:

Rapid Multi-Drug 13-15 Test is a rapid, screening test for the qualitative detection of multiple drugs and drug metabolites in human urine at specified cut off levels.

For professional use only. For in vitro diagnostic use only.

Rapid Multi-Drug 13-15 Test is an immuno-chromatographic assay for the qualitative determination of the presence of drugs listed in the table below.

The test you purchased may test for any combination of drugs listed in the table above. This assay provides only a preliminary analytical test result. Gas Chromatography/Mass spectrometry (GC/MS) is the preferred confirmatory method. Clinical consideration and professional judgment should be applied to any drug of abuse test result, particularly when preliminary positive results are indicated.

Amphetamine and the structurally related “designer” drugs are sympathomimetic amines whose biological effects include potent central nervous system (CNS) stimulation, anorectic, hyperthemic , and cardiovascular properties. They are usually taken orally, intraveneously, or by smoking. Amphetamines are readily absorbed from the gastrointestinal tract and are then either deactivated by the liver or excreted unchanged in the urine . Methamphetamine is partially metabolized to amphetamine and its major active metabolite. Amphetamines increase the heart rate and blood pressure, and suppress the appetite. Some studies indicate that heavy abuse may result in permanent damage to certain essential nerve structural in the brain.The effects of Amphetamines generally last 2-4 hours following use and the drug has a half-life of 4-24 hours in the body. About 30% of amphetamines are excreted in the urine in unchanged form, with the remainder as hydroxylated and deaminated derivatives.It can be detected in the urine for 1 to 2 days after use.

el of physical dependence. Concentrations of free Buprenorphine and Norbuprenorphine in urine may be less than 1 ng/ml after therapeutic administration, but can range up to 20 ng/ml in abuse situations.3 The plasma half life of Buprenorphine is 2-4 hours.3 While complete elimination of a single dose of the drug can take as long as 6 days, the window of detection for the parent drug in urine is thought to be approximately 3 days. Substantial abuse of Buprenorphine has also been reported in many countries where various forms of the drug are available. The drug has been diverted from legitimate channels through theft, doctor shopping, and fraudulent prescriptions, and been abused via intravenous, sublingual, intranasal and inhalation routes.

Ethyl Glucuronide (EtG) is a direct metabolite of alcohol. Presence in urine may be used to detect recent alcohol intake, even after alcohol is no longer measurable. Traditional laboratory methods detect the actual alcohol in the body, which reflects current intake within the past few hours (depending on how much was consumed). The presence of EtG in urine is a definitive indicator that it can be detected in the urine for 3 to 4 days after drinking alcohol, even alcohol is eliminated from the body. Therefore, EtG is a more accurate indicator of the recent intake of alcohol than measuring for the presence of alcohol itself. The EtG test can aid in the diagnosis of drunk driving and alcoholism, which has important significance in the forensic identification and medical examination.

Since 2004, herbal mixtures such as ‘Spice’ are sold in Switzerland, Austria, Germany and other European countries mainly via Internet shops. Although declared as incense, they are smoked as ‘bio-drugs’ by the consumers. In corresponding blogs, drug users reported cannabis-like effects after smoking. These products enjoy great popularity particularly among younger people, as up to now the mixtures are sold in head shops and via internet in many countries without age restriction. JWH-018 was developed and evaluated in basic scientific research to study structure activity relationships related to the cannabinoid receptors. JWH073 has been identified in numerous herbal products, such as “Spice”, “K2”, K3” and others. These products may be smoked for their psychoactive effects.

Ketamine is a short-acting “dissociative” anesthetic due to its ability to separate perception from sensation. It also has hallucinogenic and painkilling qualities that seem to affect people in very different ways. Ketamine is chemically related to PCP (’Angel Dust’). Ketamine is occasionally administered to people but, more commonly, is used by vets for pet surgery. Generally street K is most often diverted in liquid form from vets’ offices or medical suppliers. Ketamine generally takes 1-5 minutes to take effect. Snorted ketamine takes a little longer at 5-15 minutes. Depending on how much and how recently one has eaten, oral ketamine can take between 5 and 30 minutes to take effect. The primary effects of ketamine last approximately an 30-45 minutes if injected, 45-60 minutes when snorted, and 1-2 hours if used orally. The Drug Enforcement Administration reports that the drug can still affect the body for up to 24 hours.

6-Monoacetylmorphine (6-MAM) or 6-acetylmorphine (6-AM) is one of three active metabolites of heroin (diacetylmorphine), the others being morphine and the much less active 3-monoacetylmorphine (3-MAM). 6-MAM is rapidly created from heroin in the body, and then is either metabolized into morphine or excreted in the urine. 6-MAM remains in the urine for no more than 24 hours. So a urine specimen must be collected soon after the last heroin use, but the presence of 6-MAM guarantees that heroin was in fact used as recently as within the last day. 6-MAM is naturally found in the brain, but in such small quantities that detection of this compound in urine virtually guarantees that heroin has recently been consumed.

MDMA belongs to a family of man-made drugs. Its relatives include MDA (methylenedioxyamphetamine), and MDEA (methylenedioxyethylamphetamine). They all share the amphetamine-like effects. MDMA is a stimulant with hallucinogenic tendencies described as an empathogen as it releases mood-altering chemicals, such as cartooning and L-dopa, and may generate feelings of love and friendliness. The adverse effects of MDMA use include elevated blood pressure, hyperthermia, anxiety, paranoia and insomnia. MDMA is administered either by oral ingestion or intravenous injection. The effects of MDMA begin 30 minutes after intake, peak in an hour and last for 2 – 3 hours.

Methamphetamine is a potent sympathomimetic agent with therapeutic applications. Acute higher doses lead to enhanced stimulation of the central nervous system and induce euphoria, alertness, and a sense of increased energy and power. More acute responses produce anxiety, paranoia, psychotic behavior, and cardiac dysrhythmias. The pattern of psychosis which may appear at half-life of about 15 hours is excreted in urine as amphetamine and oxidized as deaminated and hydroxylated derivatives. However, 40% of methamphetamine is excreted unchanged. Thus the presence of the parent compound in the urine indicates methamphetamine use.

Opiates refer to any drug that is derived from the opium poppy, including the natural products, morphine and codeine, and the semi-synthetic drugs such as heroin. Opiates exert their effects on the central nervous system and organs containing smooth muscle. Opiates manifest their presence by analgesia, drowsiness, euphoria, lowering of body temperature, respiratory depression, blockade of adrenocortical response. The major pathways of elimination are kidneys (urine) and the liver where it is conjugated to glucuronic acid. Opiates and their metabolites can be detected in urine as result of heroin, morphine, codeine or poppy seed intake.

Methaqualone is a sedative and hypnotic medication. Methaqualone is a depressant that increases the activity of the GABA receptors in the brain and nervous system. When GABA activity is increased, blood pressure drops and the breathing and pulse rates slow, leading to a state of deep relaxation. Methaqualone peaks in the bloodstream within several hours, its effects generally lasting four to eight hours. Regular users build up a physical tolerance, requiring larger doses for the same effect. Overdose can lead to nervous system shut down, coma and death.

Rapid Single/multi-drug Test Cassette is a competitive immunoassay that is used to screen for the presence of various drugs and drug metabolites in urine. It is chromatographic absorbent device in which, drugs within a urine sample, competitively combined to a limited number of drug monoclonal antibody (mouse) conjugate binding sites.

When the test is activated, the urine is absorbed into each test strip by capillary action, mixes with the respective drug monoclonal antibody conjugate, and flows across a pre-coated membrane. When drug within the urine sample is below the detection level of the test, respective drug monoclonal antibody conjugate binds to the respective drug-protein conjugate immobilized in the Test Region (T) of the test strip. This produces a colored Test line in the Test Region (T) of the strip, which, regardless of its intensity, indicates a negative test result.

To serve as a procedure control, a colored line will appear at the Control Region (C), of each strip, if the test has been performed properly.