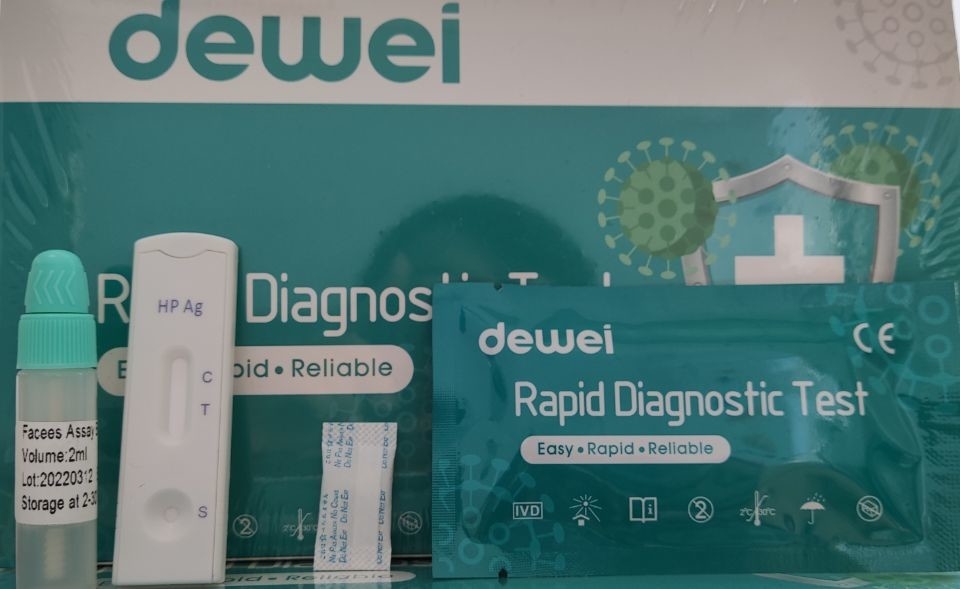 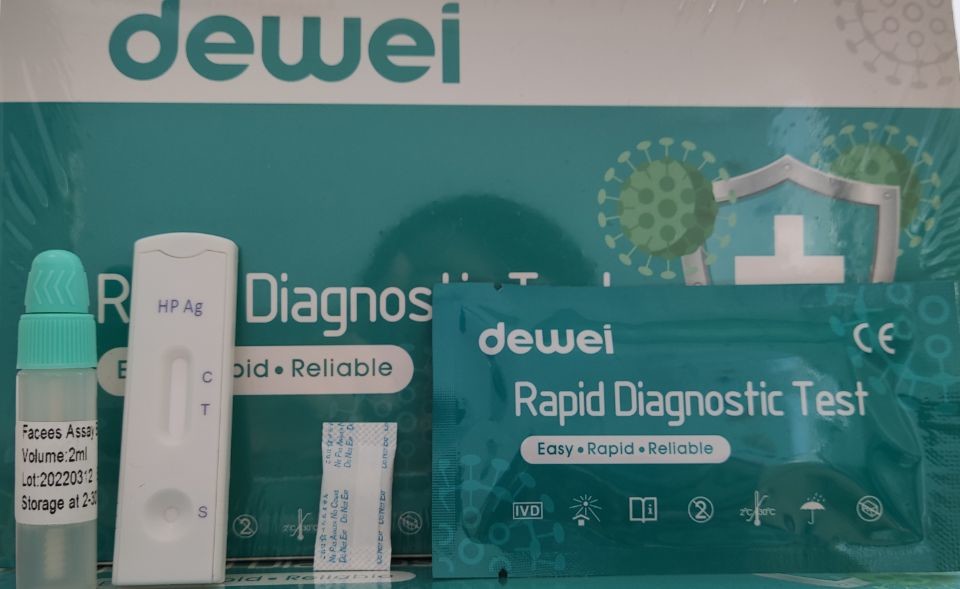 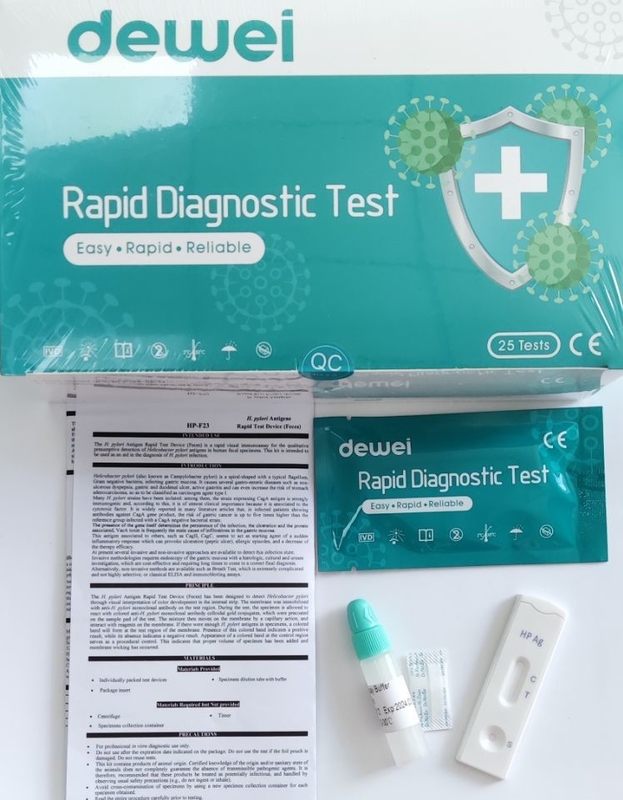 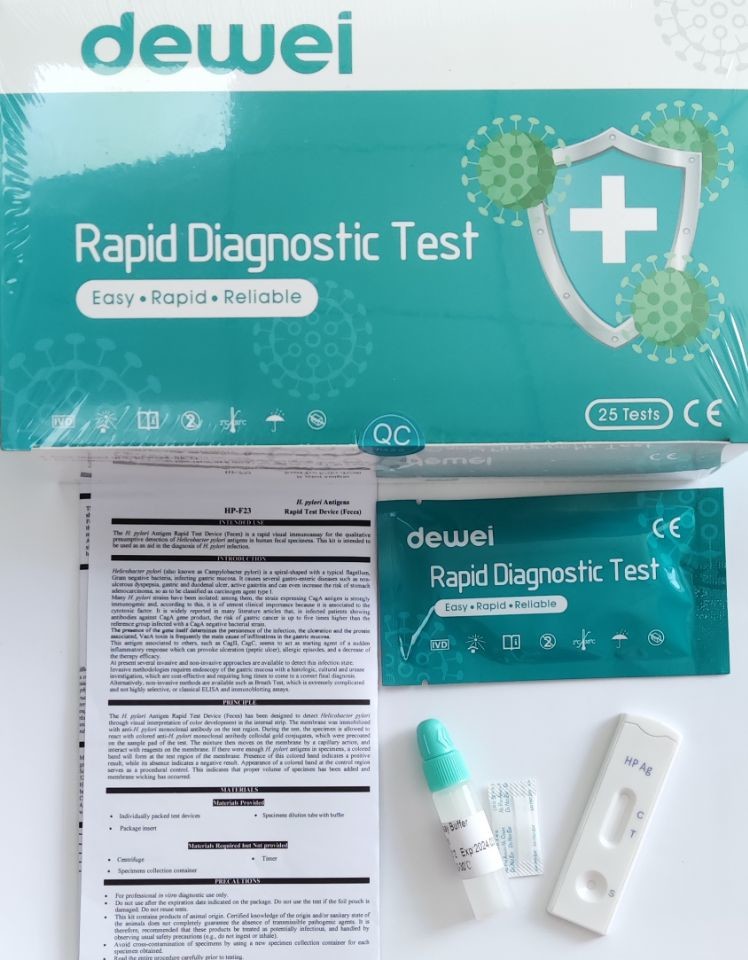 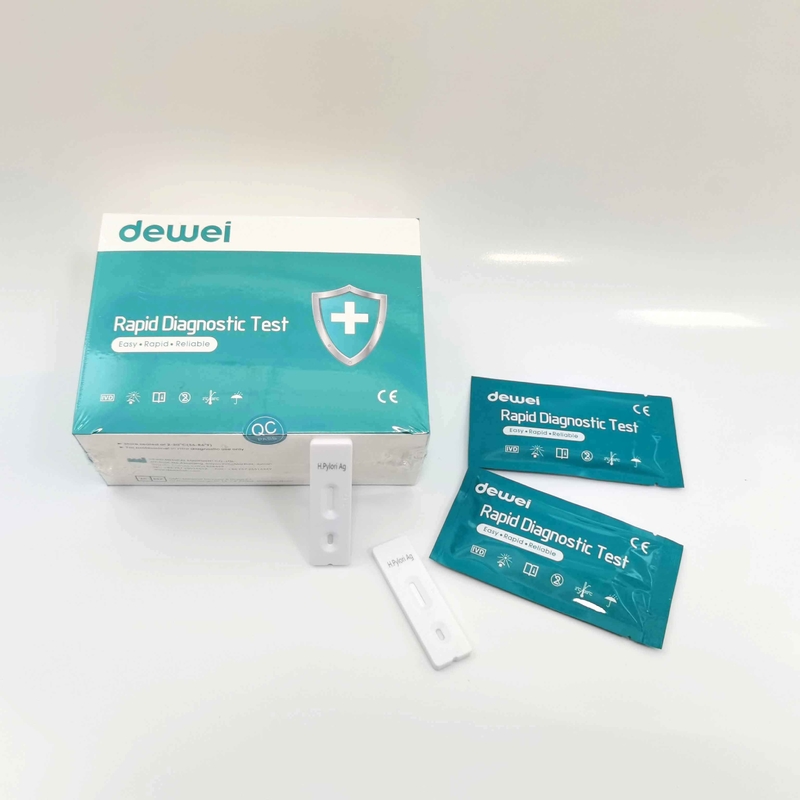 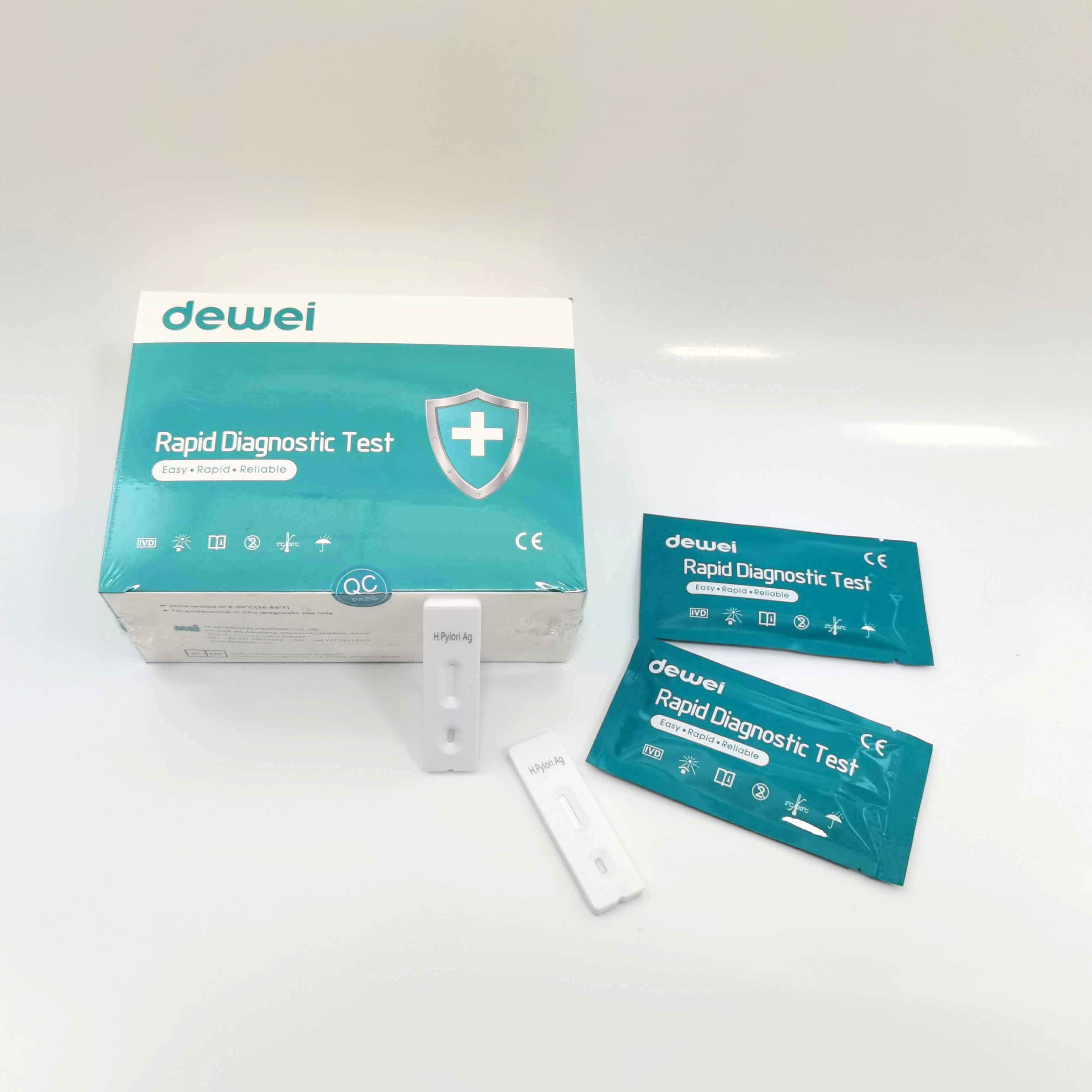 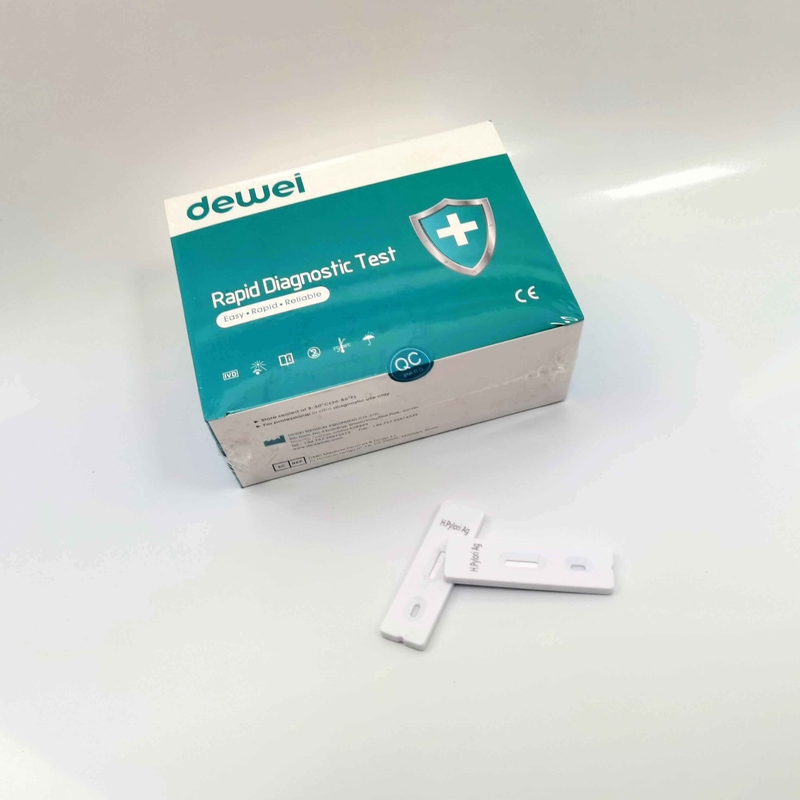 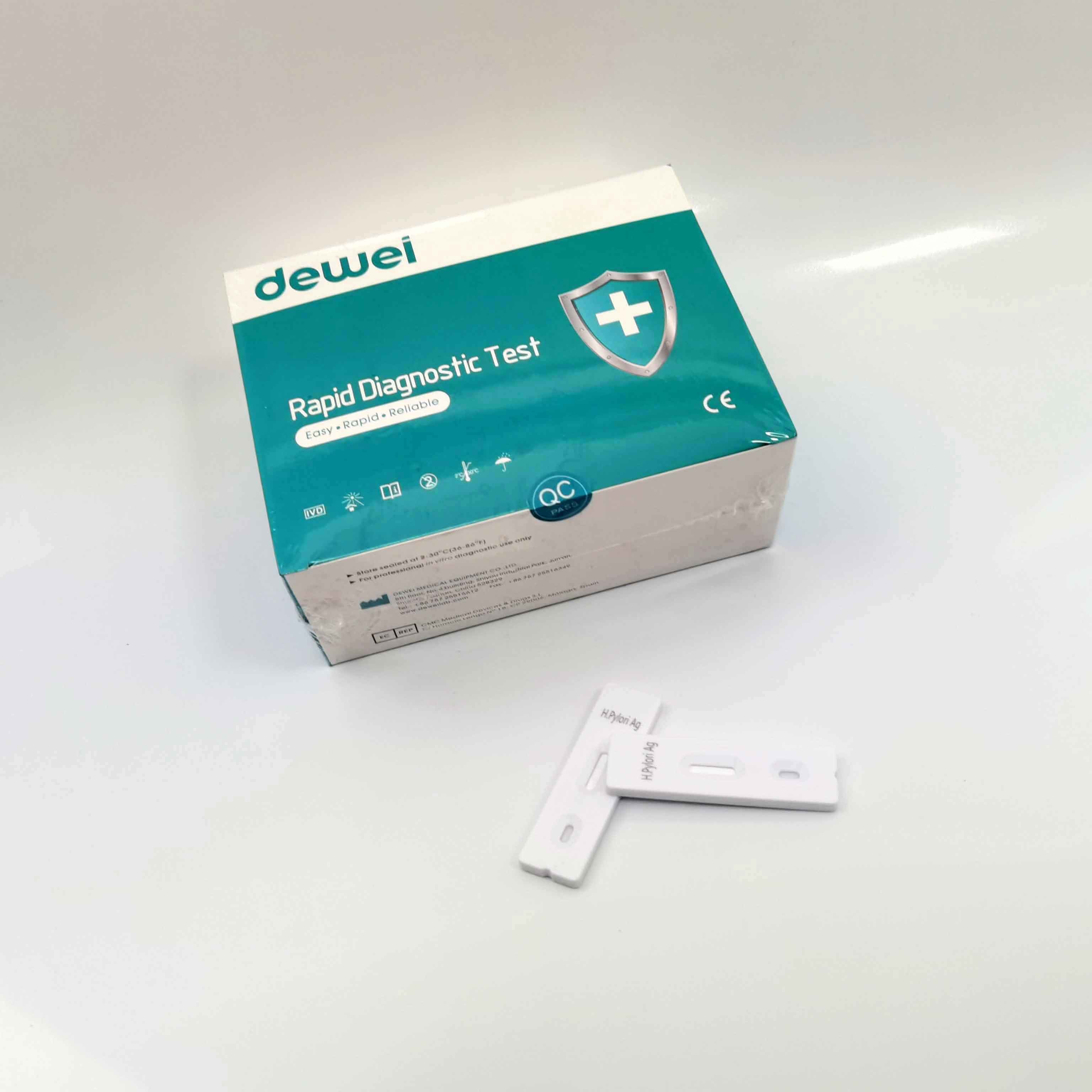 The H. pylori Antigen Rapid Test Device (Feces) is a rapid visual immunoassay for the qualitative presumptive detection of Helicobacter pylori antigens in human fecal specimens. This kit is intended to be used as an aid in the diagnosis of H. pylori infection.

Helicobacter pylori (also known as Campylobacter pylori) is a spiral-shaped with a typical flagellum, Gram negative bacteria, infecting gastric mucosa. It causes several gastro-enteric diseases such as non-ulcerous dyspepsia, gastric and duodenal ulcer, active gastritis and can even increase the risk of stomach adenocarcinoma, so as to be classified as carcinogen agent type I.

Many H. pylori strains have been isolated: among them, the strain expressing CagA antigen is strongly immunogenic and, according to this, it is of utmost clinical importance because it is associated to the cytotoxic factor. It is widely reported in many literature articles that, in infected patients showing antibodies against CagA gene product, the risk of gastric cancer is up to five times higher than the reference group infected with a CagA negative bacterial strain.

The presence of the gene itself determines the persistence of the infection, the ulceration and the protein associated, VacA toxin is frequently the main cause of infiltrations in the gastric mucosa.

This antigen associated to others, such as CagII, CagC, seems to act as starting agent of a sudden inflammatory response which can provoke ulceration (peptic ulcer), allergic episodes, and a decrease of the therapy efficacy.

At present several invasive and non-invasive approaches are available to detect this infection state.

Invasive methodologies requires endoscopy of the gastric mucosa with a histologic, cultural and urease investigation, which are cost-effective and requiring long times to come to a correct final diagnosis.

Alternatively, non-invasive methods are available such as Breath Test, which is extremely complicated and not highly selective, or classical ELISA and immunoblotting assays.

Bring tests, specimens, buffer and/or controls to room temperature (15-30°C) before use.

Best results will be obtained if the assay is performed within 6 hours after collection.

Unscrew and remove the dilution tube applicator. Be careful not to spill or spatter solution from the tube. Collect specimens by inserting the applicator stick into at least 3 different sites of the feces to collect approximately 50 mg of feces (equivalent to 1/4 of a pea).

Place the applicator back into the tube and screw the cap tightly. Be careful not to break the tip of the dilution tube.

Remove the test from its sealed pouch, and place it on a clean, level surface. Label the test with patient or control identification. To obtain a best result, the assay should be performed within one hour.

Using a piece of tissue paper, break the tip of the dilution tube. Hold the tube vertically and dispense 2 drops of solution into the specimen well (S) of the test device.

Avoid trapping air bubbles in the specimen well (S), and do not drop any solution in observation window.

As the test begins to work, you will see color move across the membrane.

Wait for the colored band(s) to appear. The result should be read at 10 minutes. Do not interpret the result after 20 minutes.

If the specimen does not migrate (presence of particles), centrifuge the extracted specimens contained in the extraction buffer vial. Collect 80 µL of supernatant, dispense into the specimen well (S) of a new test device and start afresh following the instructions mentioned above.