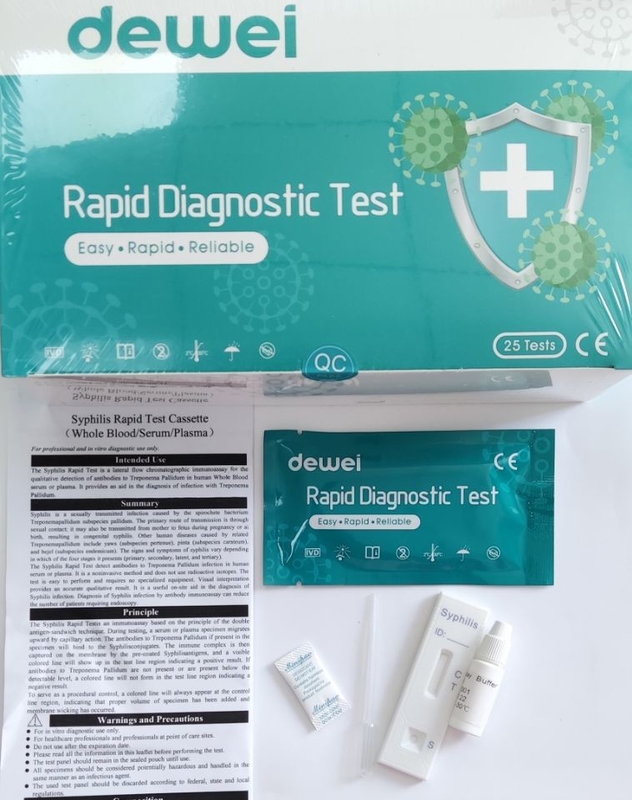 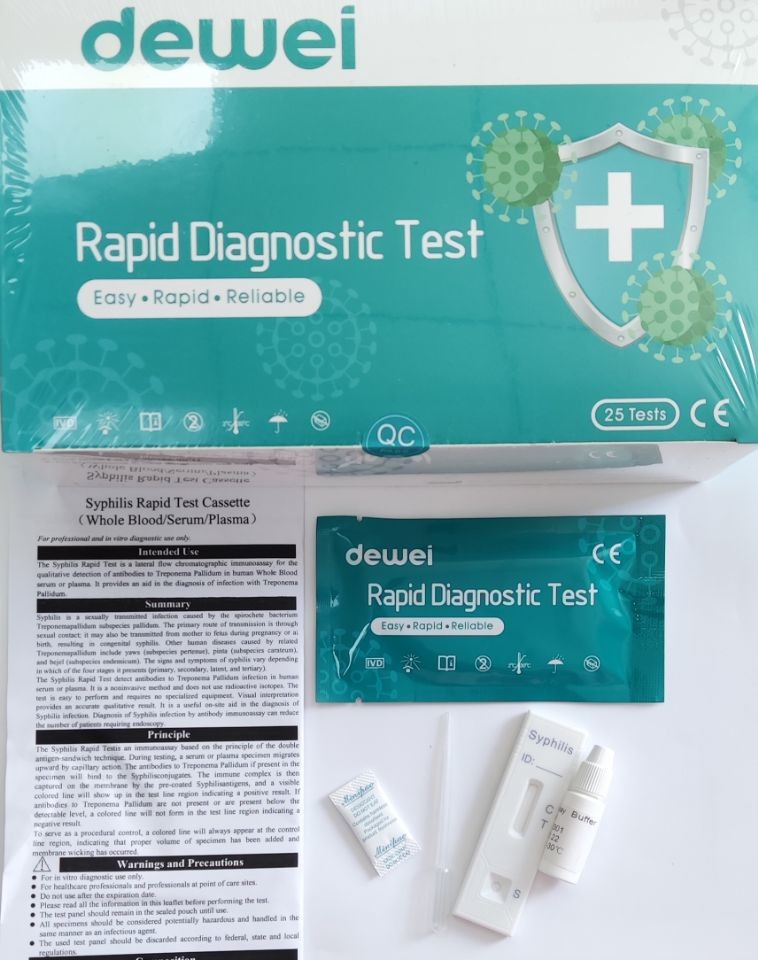 The Syphilis Rapid Test Device (Whole Blood/Serum/Plasma) is a rapid visual immunoassay for the qualitative, presumptive detection of IgM and IgG antibodies to Treponema Pallidum (TP) in human Whole Blood, serum or plasma specimens. This kit is intended for use as an aid in the diagnosis of syphilis.

Treponema Pallidum (TP), a spirochete bacterium with an outer envelope and a cytoplasmic membrane, is the causative agent of the venereal disease syphilis. Although syphilis rates are declining in the United States after an epidemic between 1986 and 1990, the incidence of syphilis in Europe has increased since 1992, especially in the countries of the Russia Federation, where peaks of 263 cases per 100,000 have been reported. In addition, the positive rate of serological test results for syphilis in HIV-infected individuals has been rising recently.

The serological detection of specific antibodies to TP has been long recognized in the diagnosis of syphilis since the natural course of the infection is characterized by periods without clinical manifestations. The antibody response to TP can be detected within 4 to 7 days after the syphilis chancre appears, allowing early detection and diagnosis of syphilis infection.

A variety of antigens have been used in syphilis serological tests, such as Rapid Plasma Cardiolipin (RPR) or VDRL antigen, TP extracts derived from in vitro culture or inoculated rabbit testes. However, RPR and VDRL antigens are not treponemal specific, and whole TP extracts are not reproducible and contain a certain amount of contaminating materials such as flagella, which may lead to a nonspecific reaction in assays of test serum.

Bring tests, specimens, buffer and/or controls to room temperature (1530°C) before use.

1. Remove the test from its sealed pouch, and place it on a clean, level surface. Label the device with patient or control identification. For best results, the assay should be performed within one hour.

2. Using the provided disposable pipette, transfer 3 drops of serum/plasma specimen (approximately 75 µL) to the specimen well (S) of the device and start the timer.

Transfer 2 drop of whole blood specimen (approximately 50 µL) to the specimen well (S) of the device with the provided disposable pipette, then add 1 drop of buffer and start the timer.

Allow 2 hanging drops of fingerstick whole blood specimen to fall into the center of the specimen well (S) on the device, then add 1 drop of buffer and start the timer.

As the test begins to work, you will see color move across the membrane.

3. Wait for the colored band(s) to appear. The result should be read at 10 minutes. Do not interpret the result after 20 minutes.